Canada’s National Research Council (NRC) has identified Cities of the Future as a game-changing technology and economic opportunity.  Following a national dialogue, an Executive Summit was held in Toronto on March 31, 2016, resulting in an important summary report that will become the seed for Canadian R&D strategy in this sector.

The conclusion so far is that the opportunity for Canada is to muster leadership in the following three areas (in order):

The real challenge for Canada is that most of the global pioneers on the smart city frontier have already staked out this exact same territory. And this isn’t surprising given that the predominant ‘civil engineering’ vision for the future of cities imagines them as machines – as beautiful infrastructure well-oiled with data.

So where can Canada its best niche?   We are blessed with a number of advantages including:

Cities aren’t machines, they are cradles for future of humanity.  That’s the opportunity.  The engineering vision above needs to be socially enhanced as illustrated here: 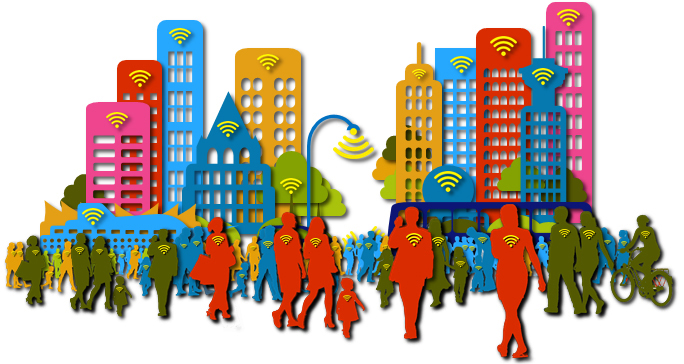 Another way to consider the opportunity starts with the concept of “transhumanity”, where wearable technologies are enabling people to extend their natural capacity.  Some of the ideas here still seem creepy, so a better term may be “transurbanity”, where people with such technologies, participating autonomously, can dramatically extend the capacity and livability of their cities. Rather than becoming the oil in a machine, people collectively become the neurons of a higher-order urban ‘mind’ that is enabled and energized by data.
More concretely, people are a horizontal strategy, whereas infrastructure, transportation and energy are all verticals.  By playing it cards well, Canada can win in multiple verticals.
Urban Opus focuses on this human interface for smart cities precisely because it is a game-changing horizontal opportunity that fits beautifully with Canada’s breadth of competencies across science, technology, digital story telling, culture and society.  Not to be too political, but it is a very ‘liberal’ trajectory.

Originally an astronomer, Dr. Vogt found himself in cyberspace. David is a pioneer - driven by the purposeful civilization of digital frontiers. He specializes in collaborative applied innovation, specifically bringing together entrepreneurs, researchers, customers and other stakeholders to co-create original, market-ready solutions involving emerging technologies. David's focus is the experience economy: how humanity is entering an era of almost magical ability to stage and mediate individual and collective experience.
Recent Posts
Recent Comments
Categories